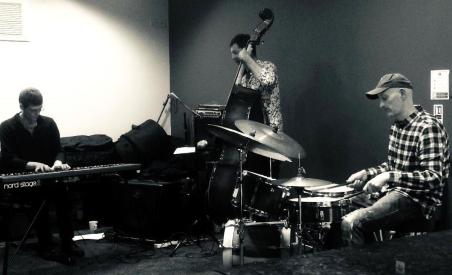 They took us through a kaleidoscope of jazz numbers, many familiar and others less so but all the better for it. Some highlights were:
‘Recorder me’-[Joe Henderson]; ‘Sentimental mood’- [Ellington Coltrane];
‘Everbodies song but not my own’- [John Taylor];‘Dolphin dance’- [Herbie Handcock]; ‘Celeste’- [Ralph Towner]; ‘Midnight voyage’-  [Joey Calderazzo]; ‘Blue peril’- [Bud Pole];  Broken wing for Chet Baker;  ‘Voyage’- [Kenny Barron] and ‘Sunshower’ also Kenny Barron. 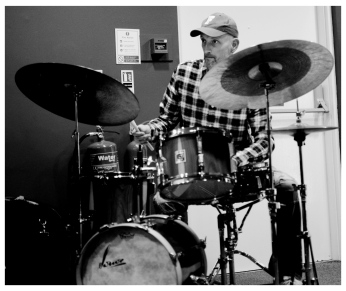 This was a tight knit trio that displayed tonal virtuosity but individually showed just why they are at the top of their game. Neil Birse, not long out of The Guildhall School of Music showed a maturity, fluidity  and sensitivity beyond his years. Pete Lowit’s bass playing is always a joy to listen to; it is often said the cello is the instrument closest to the human voice, Pete’s double bass is a close second. Fraser Peterkin’s relationship with his drum kit is extraordinary.Throughout the evening Fraser provided a reassuring backdrop that ranged from caressing his snare drum with the lightest of touches with his  brushes to an almost catastrophic smashing of his Tom drum, reminiscent of Ginger Baker at his best. Fraser’s finale was really something to behold; there are definitely West African genes coursing through his veins. Thank you gentlemen for a fine evening of jazz, we look forward to your return.